I grew up in a family made up almost entirely of professional classical musicians so have been around music right from day one. I played a range of instruments as a kid (recorder, cello, piano, flute, bass guitar, acoustic guitar) and technically speaking my first ever professional gig was singing in the chorus for Mozart’s ‘Marriage of figaro’ with my mums orchestra in London QEH, Paris and Lisbon Opera houses aged six! Through my dads love of 60’s and 70’s rock, RnB and Folk I fell in love with the Bass at 13 and never looked back. Since becoming professional I have gigged in various bands, (Unkle Bob, Saint Saviour and The Irrepressibles) toured around the world, performed in Musicals, recorded albums with Ken Nelson (Coldplay, Gomez, Kings of convenience) and Saul Davies from ‘James’, even headlined a free festival in Moscow as an openly gay band (Irrepressibles) in front of a massive video of two naked guys kissing to 5000 people opposite the old soviet building!! It’s been a varied but wonderful time and I feel incredibly fortunate to have been given the opportunities I’ve had.

I currently play for Electro Art-Pop group ‘The Irrepressibles’ on both Cello and Bass. A lot of that gig has been mainly on cello but using an octave pedal and a loop station which enables me to play bass lines on the cello. Our violinist is also plugged into the looper so we essentially create entire string quartets from my feet! We have however done some more rockier ep’s and shows where I switch to Bass (sometimes mid song, after just looping something on the cello) grab a pick and make it nice and gritty. It definitely keeps me on my toes!

I’ve been very lucky over the years playing some really wonderful shows. My first proper band ‘Unkle Bob’ did some really great support tours including 90’s Mancunian stars ‘James’ and also ‘The Goo Goo Dolls.’ Those tours included gigs at the HMV Forum in Kentish Town, The Royal Albert Hall and Brixton Academy. The Latter was especially poignant as it was the last show my dad saw me do before he died. I still have his ticket stub for that show! It was very special. With The Irrepressibles we got asked to perform at the first run through of Beck’s “Song Reader” album at the Barbican Centre. Beck was there, along with Jarvis Cocker, Charlotte Gainsburg, Franz Ferdinand, Beth Orton, The Staves, The Mighty Boosh….so many idols of ours! It was really surreal but everyone was so lovely and very complimentary.

It’s a white J4 series with a tortoiseshell scratch plate. It’s got a 33″ neck and an undersized body which is why I’ve named it “Frodo” as an old teacher of mine once commented it was built to match my hobbit like dimensions. It has J-Retro East pick ups which sound lovely and zingy and I have Elixir strings on it. It looks and sounds wonderfully shiny!

They are beautifully crafted instruments made by some of the nicest humans on the planet! As instruments they do everything you need them too and without fuss. Chris and the team have looked after me so well right from the word go and really listened to what I needed from the instrument they were going to make me. It’s a real honour to be surrounded and supported by understanding individuals who happen to be incredibly talented at what they do!

I got Frodo in September 2012, jet lagged to hell after coming home from a few gigs in Beijing. 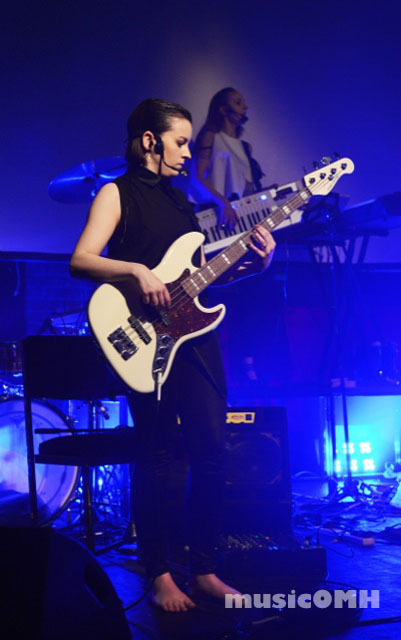